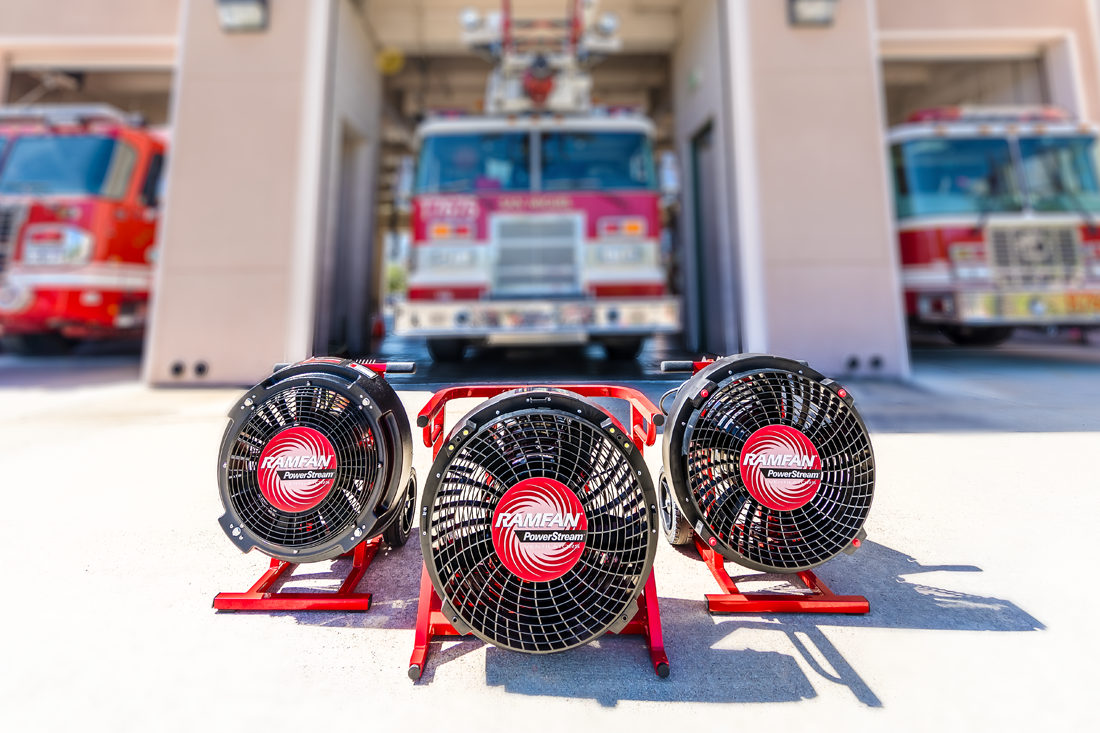 It is the details that set the RAMFAN portable ventilator apart. When fighting fires, you depend on two in particular to get the job done – the integrated flow straighteners and the purpose-built motor and electronic controllers. Selecting a fan for firefighting and rescue operations, much like a hand line nozzle, comes down to ensuring you have the right flow performance for the right mission. Flow performance includes flow volume, pressure, and stream pattern. The right combination of these performance factors will determine how successful ventilation tactics will be for a given mission.

When a new fan is being conceptualized, there are several factors of airflow that will ultimately affect the flow performance to be delivered; the impeller, the motor, and the stream pattern. This concept of Flow Path Control is at the very core of our operations at Euramco Group, and we’ve made it our priority to engineer the best fans for the mission, whether it be Naval shipboard damage control, offshore drilling platform operations, hazardous area confined space work, or frontline firefighters and rescuers.

Firefighters are beginning to see the benefits of stream pattern in flow performance. The recent introduction of “stream shaping” to firefighting fans, a standard feature that is included in all RAMFAN EX models, has really expanded the operational flexibility of PPV fans on the fireground. Positioning flexibility is the most often cited benefit, with the ability to position the fan far beyond the 5ft or 1.5m limit of traditional stream pattern (i.e. “Cone of Air”) fans and still deliver appropriate volumes of airflow to, and more importantly through, the structure.

Beyond flexibility in positioning, and back at the basics of fan engineering, is airflow velocity. Shaping the stream into a straighter, tighter pattern counteracts the centrifugal force of the spinning impeller to straighten the airflow as it leaves the shroud. This increases the velocity, or speed, of the airflow. In practice, this accelerated flow – like a fire pump – can overcome the friction loss of a complex structure as the flow path moves into the entry point and towards the established exhaust. In short, whereas the old PPV fans were focusing on getting the air to the entry door, new PPV – or those with more straightened, accelerated flow performance – are built to better deliver air through the structure and out the back door. This new development brings air velocity to the top of the list of metrics when comparing fans for structural PPV rather than simple airflow volume (cfm or m3/hr), which does not consider how different size doorways and complex hallway systems can dramatically restrict, if not completely stop, lower velocity air movement through a structure.

Another manufacturing feat by Euramco Group was to produce purpose-built motors and electronic controllers to improve flow performance. Electric (AC) powered EX fans are equipped with RAMFAN IntelliSense™ E1 controllers. The IntelliSense™ E1 controller is water-resistant with variable speed control to deliver continuous airflow adjustment from zero to maximum speed. It protects the fan from an inrush of current at startup, to prevent a spike that could otherwise trip electrical breakers. The EX400 and EX500 models include a dual current toggle switch to power the fan from a GFCI 20A fire truck circuit or 15A house circuit or 2kW generator. After creating IntelliSense™ controllers, we went to work on improving the motors on the fans to increase flow performance.

The new BLDC motor range by Euramco Group is the first specially developed high-performance brushless motor for firefighting ventilation. The advanced BLDC motors are more efficient, quieter, lighter and last longer than its predecessor. However, controlling a BLDC motor, like the one on a RAMFAN EX50Li, requires considerably more circuitry. So a new generation of RAMFAN’s IntelliSense™ motor controller – the E2 – was designed.

The new IntelliSense E2 controller is fully loaded. It uses motor position information from embedded sensors to electronically switch the stator windings in the correct sequence to maintain rotation of the magnet assembly. The IntelliSense E2 combines this firmware-defined motor controller with two integrated battery management systems (BMS) and integrated battery chargers – all on a single printed circuit board (PCB) in a control box that is smaller than most laptop computers.

Paying close attention to the details is how we created fans that are a step above. We focused on improving the components of flow performance to build you a better fan. One with integrating flow straighteners and purpose-built motors and controllers. Our signature EX models are the most dependable and best selling electric and battery-powered PPV fans – Ever!