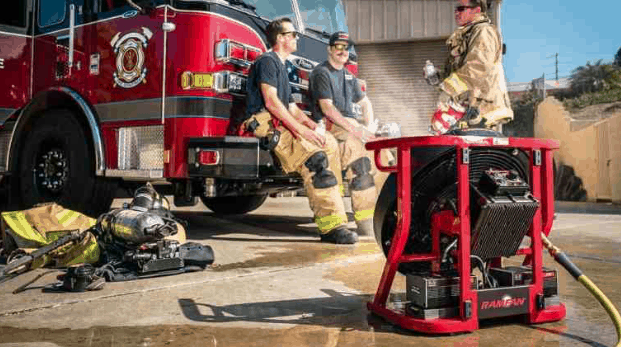 Firefighter Health in the Rehabilitation Area

Rehabilitation in the fire service is very important to maintain. Firefighters are always up against extreme conditions, which can affect their health. Rehabilitation on the fire ground can help prevent on-site injury or death. Protective measures need to be taken to keep firefighters safe.

According to the National Fire Protection Association (NFPA) 1584: Standard on the Rehabilitation Process for Members During Emergency Operations and Training Exercises, “This standard establishes the minimum criteria for developing and implementing a rehabilitation process for fire department members at incident scene operations and training exercises.”

NFPA 1584 explains the requirements to maintain health safety for firefighters, which include rest and recovery, EMS treatment, rehydration, medical monitoring, and active cooling, which is where rehabilitation misting comes in.

During and after interior operations, it is well documented that firefighters can suffer from heat-related stress and illnesses. A “rehab” area should be set-up for them to rehydrate, cool down, and lower their core body temperature into normal range — firefighters have been known to spike body temperatures over 100o Fahrenheit after completing a mission. Ventilation fans that include misters provide an effective and efficient way to bring down the firefighters’ temperatures to a healthy level.

There are many misters available with RAMFAN, but whichever mister is chosen, whether on 40cm (GX200, EX400), 46cm (EX50Li, EX500), 53cm (GX400, WF540), 60cm (GX500), the fan can fulfill multiple missions throughout the operation. First as a tactical ventilator during or immediately following the firefighting operations, and second as a rehab mister for recovering firefighter health. The combination of the significantly decreased airflow from its tactical use at the incident and the misters create a comfortable cooling atmosphere.

In addition, there are some European firefighters who actively use misting during tactical ventilation operations to help rapidly cool the interior atmosphere, which may help prevent rapid fire spread if employed properly.

The EL8111, as installed on the EX50Li, EX500, and GX350, uses nozzles that create a much finer mist than any other on the market. The smaller the water droplet, the more surface area there is to absorb heat, thus better cooling of the local atmosphere. The EX50Li, in fact, has a “rehab” setting on the speed control which is optimized for rehab misting ops, creating a low noise, low-velocity airflow that helps lower air temperatures without getting the firefighters too wet.

Maintaining firefighter health is vital when going out on calls. Often, emergencies are back-to-back, so monitoring and addressing their well-being is part of the job. With proper equipment, such as RAMFAN’s ventilation and misting options, firefighters will have the strength and energy to continue to get the job done.